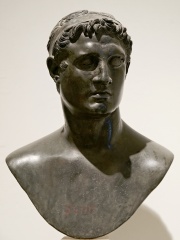 Ptolemy II Philadelphus (Greek: Πτολεμαῖος Φιλάδελφος Ptolemaios Philadelphos, "Ptolemy, sibling-lover"; 309 – 28 January 246 BC), also known posthumously as Ptolemy the Great, was the pharaoh of Ptolemaic Egypt from 284 to 246 BC. He was the son of Ptolemy I, the Macedonian Greek general of Alexander the Great who founded the Ptolemaic Kingdom after the death of Alexander, and Queen Berenice I, originally from Macedon in northern Greece. During Ptolemy II's reign, the material and literary splendour of the Alexandrian court was at its height. He promoted the Museum and Library of Alexandria. Read more on Wikipedia

Ptolemy II Philadelphus is most famous for being the king of Egypt in the 3rd century BC. He was the son of Ptolemy I Soter and Berenice, and the father of Ptolemy III Euergetes. He ruled for 20 years, from 285 BC to 246 BC.

Among politicians, Ptolemy II Philadelphus ranks 640 out of 15,577. Before him are James Monroe, Ngo Dinh Diem, Sweyn Forkbeard, Lucius Tarquinius Priscus, Arthur Seyss-Inquart, and Valéry Giscard d'Estaing. After him are Christian II of Denmark, Philip I of France, Tigranes the Great, Miloš Zeman, Jalal ad-Din Mingburnu, and Igor of Kiev.

Others Deceased in 246 BC