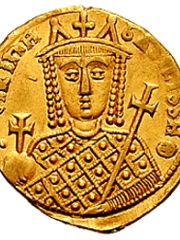 Irene of Athens (Greek: Εἰρήνη, Eirénē; 750/756 – 9 August 803), surname Sarantapechaina (Σαρανταπήχαινα), was Byzantine empress consort to Emperor Leo IV from 775 to 780, regent during the childhood of their son Constantine VI from 780 until 790, co-ruler from 792 until 797, and finally empress regnant and sole ruler of the Eastern Roman Empire from 797 to 802. A member of the politically prominent Sarantapechos family, she was selected as Leo IV's bride for unknown reasons in 768. Even though her husband was an iconoclast, she harbored iconophile sympathies. Read more on Wikipedia

Irene of Athens is most famous for being the wife of the Byzantine Emperor Constantine V, and for her involvement in the iconoclastic controversy.

Page views of Irene of Athens by language

Among politicians, Irene of Athens ranks 679 out of 15,577. Before her are Hezekiah, Abd al-Rahman III, Ladislaus the Posthumous, Olaf Scholz, Aldo Moro, and Vytautas. After her are Arnulf of Carinthia, Hong Taiji, Michael VIII Palaiologos, Maxentius, Ion Antonescu, and Franjo Tuđman.