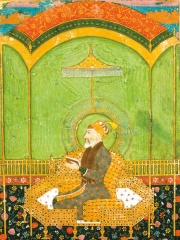 Shihab-ud-Din Muhammad Khurram (5 January 1592 – 22 January 1666), better known by his regnal name Shah Jahan I (Persian pronunciation: [ʃɑːh d͡ʒahɑːn]; lit. 'King of the World'), was the fifth emperor of the Mughal Empire, reigning from January 1628 until July 1658. Under his emperorship, the Mughals reached the peak of their architectural achievements and cultural glory. The third son of Jahangir (r. Read more on Wikipedia

Shah Jahan was the emperor of the Mughal Empire from 1628-1658. He is most famous for building the Taj Mahal in Agra, India.

Among politicians, Shah Jahan ranks 591 out of 15,577. Before him are Anne, Queen of Great Britain, Manuel I Komnenos, Herbert Hoover, Oscar II of Sweden, Frederick William IV of Prussia, and Epaminondas. After him are Khosrow I, Valens, Darius II, Hans Frank, Ivan III of Russia, and Ptolemy XIV of Egypt.