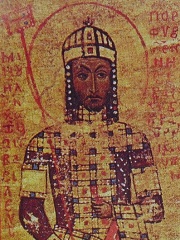 Manuel I Komnenos (Greek: Μανουήλ Α' Κομνηνός; 28 November 1118 – 24 September 1180), Latinized Comnenus, also called Porphyrogennetos ("born in the purple"), was a Byzantine emperor of the 12th century who reigned over a crucial turning point in the history of Byzantium and the Mediterranean. His reign saw the last flowering of the Komnenian restoration, during which the Byzantine Empire had seen a resurgence of its military and economic power, and had enjoyed a cultural revival. Eager to restore his empire to its past glories as the superpower of the Mediterranean world, Manuel pursued an energetic and ambitious foreign policy. Read more on Wikipedia

Manuel I Komnenos is most famous for being the emperor of the Byzantine Empire from 1143 to 1180.

Page views of Manuel I Komnenos by language

Among politicians, Manuel I Komnenos ranks 533 out of 15,710. Before him are Moon Jae-in, George III of the United Kingdom, Ptolemy II Philadelphus, Leopold III of Belgium, Rudolf I of Germany, and Maximian. After him are Zhou Enlai, Louis I of Hungary, John Hunyadi, Augustus II the Strong, Frederick William III of Prussia, and Osman III.

Among people born in 1118, Manuel I Komnenos ranks 1. After him are Andronikos I Komnenos, Taira no Kiyomori, Odo II, Duke of Burgundy, and Saigyō. Among people deceased in 1180, Manuel I Komnenos ranks 2. Before him is Louis VII of France. After him are John of Salisbury, Al-Mustadi, John Tzetzes, Minamoto no Yorimasa, Abraham ibn Daud, Theodora Komnene, Queen of Jerusalem, Soběslav II, Duke of Bohemia, and Yaroslav II of Kiev.