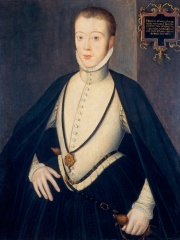 Henry Stuart, Lord Darnley (1546 – 10 February 1567), was an English nobleman who was the second husband of Mary, Queen of Scots, and the father of James VI of Scotland and I of England. Through his parents, he had claims to both the Scottish and English thrones, and from his marriage in 1565 he was king consort of Scotland. Less than a year after the birth of his son, Darnley was murdered at Kirk o' Field in 1567. Read more on Wikipedia

Among politicians, Henry Stuart, Lord Darnley ranks 1,062 out of 15,577. Before him are Archduke Otto of Austria, Xuande Emperor, János Kádár, Emperor Xuanzong of Tang, Roh Tae-woo, and Yesugei. After him are Creon, Queen Paola of Belgium, Saud of Saudi Arabia, Otto IV, Holy Roman Emperor, Shoshenq I, and Chlothar II.