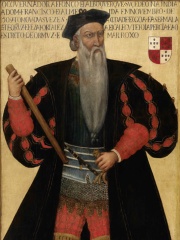 Afonso de Albuquerque, 1st Duke of Goa (Portuguese pronunciation: [ɐˈfõsu ði aɫβuˈkɛɾk(ɨ)]; (c. 1453 – 16 December 1515) was a Portuguese general, admiral, and statesman. He served as viceroy of Portuguese India from 1509 to 1515, during which he expanded Portuguese influence across the Indian Ocean and built a reputation as a fierce and skilled military commander.Albuquerque advanced the three-fold Portuguese grand scheme of combating Islam, spreading Christianity, and securing the trade of spices by establishing a Portuguese Asian empire. Read more on Wikipedia

Among noblemen, Afonso de Albuquerque ranks 66 out of 843. Before him are Grand Duke Michael Alexandrovich of Russia, Olga of Kiev, Empress Matilda, Jeanne d'Albret, Philip the Bold, and Albert I of Germany. After him are Princess Märtha of Sweden, Grand Duchess Maria Nikolaevna of Russia, Raymond III, Count of Tripoli, Caroline Matilda of Great Britain, Camilla, Duchess of Cornwall, and Ramesses V.

Among NOBLEMEN In Portugal