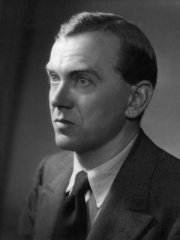 Henry Graham Greene (2 October 1904 – 3 April 1991) was an English writer and journalist regarded by many as one of the leading English novelists of the 20th century. Combining literary acclaim with widespread popularity, Greene acquired a reputation early in his lifetime as a major writer, both of serious Catholic novels, and of thrillers (or "entertainments" as he termed them). He was shortlisted, in 1966 and 1967, for the Nobel Prize for Literature. Read more on Wikipedia

Graham Greene is most famous for his novels, The End of the Affair and The Quiet American.

Among writers, Graham Greene ranks 326 out of 5,755. Before him are Ezra Pound, Carlos Castaneda, Georges Bataille, Arthur Schnitzler, Einhard, and Dionysius of Halicarnassus. After him are Elfriede Jelinek, Arthur Miller, André Malraux, Mikhail Lermontov, Ali-Shir Nava'i, and Michael Ende.