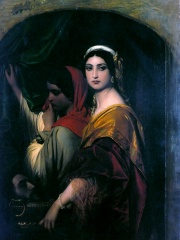 Herodias (Greek: Ἡρῳδιάς, Hērǭdiás; c. 15 BC – after AD 39) was a princess of the Herodian dynasty of Judaea during the time of the Roman Empire. Read more on Wikipedia

Herculaneum is most famous for the eruption of Mt. Vesuvius in 79 AD.

Page views of Herodias by language

Among noblemen, Herodias ranks 63 out of 842. Before her are Lady Jane Grey, Jeanne d'Albret, Archduke Charles, Duke of Teschen, Grand Duchess Maria Nikolaevna of Russia, Camilla, Duchess of Cornwall, and Fatma Sultan. After her are Empress Matilda, Olga of Kiev, Afonso de Albuquerque, Princess Märtha of Sweden, Albert II, Prince of Monaco, and Philip the Bold.

Among people born in 100 BC, Herodias ranks 9. Before her are Saint Joseph, Bartholomew the Apostle, Saint Anne, Elizabeth, Joachim, and Crixus. After her are Cornelius Nepos, Simon of Cyrene, Cleopatra V of Egypt, Ambiorix, Gaius Octavius, and Gamaliel. Among people deceased in 100, Herodias ranks 17. Before her are John the Evangelist, Zacchaeus, Caiaphas, Longinus, Barabbas, and Dionysius the Areopagite. After her are Thecla, Salome, Apollonius of Tyana, Simon of Cyrene, Saint Sarah, and Anna the Prophetess.

Among NOBLEMEN In Israel