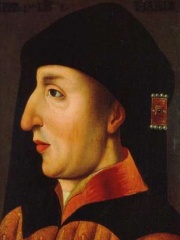 Philip II the Bold (French: Philippe II le Hardi; Dutch: Filips de Stoute; 17 January 1342 – 27 April 1404) was Duke of Burgundy and jure uxoris Count of Flanders, Artois and Burgundy. He was the fourth and youngest son of King John II of France and Bonne of Luxembourg.Philip II was the founder of the Burgundian branch of the House of Valois. Read more on Wikipedia

Philip the Bold was a Duke of Burgundy, and is most famous for his military exploits.

Page views of Philip the Bolds by language

Among noblemen, Philip the Bold ranks 69 out of 842. Before him are Herodias, Empress Matilda, Olga of Kiev, Afonso de Albuquerque, Princess Märtha of Sweden, and Albert II, Prince of Monaco. After him are Prince Gustaf Adolf, Duke of Västerbotten, Maria Alexandrovna, Princess Alice of Battenberg, Francesco I de' Medici, Grand Duke of Tuscany, Dmitry Donskoy, and Henri, Grand Duke of Luxembourg.