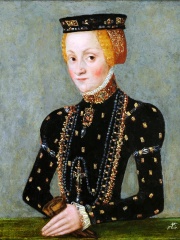 Catherine Jagiellon (Polish: Katarzyna Jagiellonka; Swedish: Katarina Jagellonica, Lithuanian: Kotryna Jogailatė; 1 November 1526 – 16 September 1583) was a Polish princess and Queen of Sweden as the first wife of King John III. As such, she was also Duchess of Finland (1562–1583) and Grand Princess of Finland (1581–1583). Catherine had significant influence over state affairs during the reign of her spouse and negotiated with the pope to introduce a counter-reformation in Sweden. Read more on Wikipedia

Among politicians, Catherine Jagiellon ranks 1,733 out of 15,577. Before her are Ephialtes of Trachis, Ahmet Necdet Sezer, Conrad I of Germany, Bernie Sanders, Yun Posun, and Emperor Huizong of Song. After her are Peter IV of Aragon, Desiderius, Augusta Victoria of Schleswig-Holstein, Hiero II of Syracuse, Hu Yaobang, and Publius Clodius Pulcher.