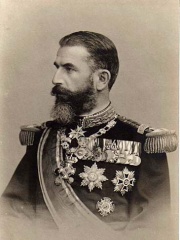 Carol I of Romania

Carol I or Charles I of Romania (20 April 1839 – 10 October [O.S. 27 September] 1914), born Prince Karl of Hohenzollern-Sigmaringen, was the monarch of Romania from 1866 to his death in 1914, ruling as Prince (Domnitor) from 1866 to 1881, and as King from 1881 to 1914. He was elected Prince of the Romanian United Principalities on 20 April 1866 after the overthrow of Alexandru Ioan Cuza by a palace coup d'état. In May 1877, Romania was proclaimed an independent and sovereign nation. The defeat of the Ottoman Empire (1878) in the Russo-Turkish War secured Romanian independence, and he was proclaimed King on 26 March [O.S. Read more on Wikipedia

Carol I of Romania was most famous for being the first king of Romania. He was a member of the Hohenzollern-Sigmaringen dynasty and ruled from 1866 to 1914.

Page views of Carol I of Romanias by language

Among politicians, Carol I of Romania ranks 1,402 out of 15,710. Before him are Athaulf, Boris I of Bulgaria, Mengistu Haile Mariam, Piero di Cosimo de' Medici, Shennong, and Ferdinand III of Castile. After him are Infante Juan, Count of Barcelona, Alexios IV Angelos, Imad ad-Din Zengi, Alexander Farnese, Duke of Parma, Friedrich Ratzel, and Mary of Guise.