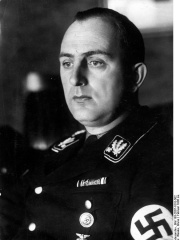 Kurt Max Franz Daluege (15 September 1897 – 24 October 1946) was chief of the national uniformed Ordnungspolizei (Order Police) of Nazi Germany. Following Reinhard Heydrich's assassination in 1942, he served as Deputy Protector for the Protectorate of Bohemia and Moravia. Daluege directed the German measures of retribution for the assassination, including the Lidice massacre. Read more on Wikipedia

Kurt Daluege was a German Nazi who was the chief of the uniformed police and the commander of the Order Police during the Holocaust. He was in charge of the deportation of Jews to concentration camps, and he was responsible for the deaths of many people.

Among politicians, Kurt Daluege ranks 1,649 out of 15,710. Before him are Anna Maria Mozart, Teia, Ferdinand I of Aragon, Otto of Bavaria, Öz Beg Khan, and Lon Nol. After him are Alfonso V of Aragon, Emil Hácha, Emperor Zhongzong of Tang, Mago Barca, Clovis II, and Shalmaneser III.