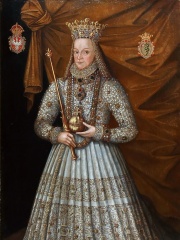 Anna Jagiellon (Polish: Anna Jagiellonka, Lithuanian: Ona Jogailaitė; 18 October 1523 – 12 November 1596) was Queen of Poland and Grand Duchess of Lithuania from 1575 to 1586. Daughter of Polish King Sigismund I the Old and Italian duchess Bona Sforza, Anna received multiple proposals, but remained unmarried until the age of 52. After the death of King Sigismund II Augustus, her brother and the last male member of the Jagiellonian dynasty, her hand was sought by pretenders to the Polish throne to maintain the dynastic tradition. Read more on Wikipedia

Among people born in 1523, Anna Jagiellon ranks 2. Before her is Catherine Howard. After her are Gabriele Falloppio, Margaret of France, Duchess of Berry, Blaise de Vigenère, Charles de Bourbon, Catherine Carey, Stradanus, Pieter Pourbus, and Gulbadan Begum. Among people deceased in 1596, Anna Jagiellon ranks 3. Before her are Francis Drake and Jean Bodin. After her are Koca Sinan Pasha, Blaise de Vigenère, George I, Landgrave of Hesse-Darmstadt, Pellegrino Tibaldi, and Giaches de Wert.