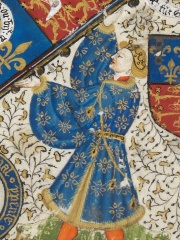 Richard of York, 3rd Duke of York (22 September 1411 – 30 December 1460), also named Richard Plantagenet, was a leading English magnate, a great-grandson of King Edward III through his father, and a great-great-great-grandson of the same king through his mother. He inherited vast estates and served in various offices of state in Ireland, France, and England, a country he ultimately governed as Lord Protector during the madness of King Henry VI. His conflicts with Henry's wife, Margaret of Anjou, and other members of Henry's court, as well as his competing claim to the throne, were a leading factor in the political upheaval of mid-fifteenth-century England, and a major cause of the Wars of the Roses. Richard eventually attempted to take the throne, but was dissuaded, although it was agreed that he would become king on Henry's death. Read more on Wikipedia

Since 2007, the English Wikipedia page of Richard of York, 3rd Duke of York has received more than 1,455,582 page views. His biography is available in 33 different languages on Wikipedia making him the 2,068th most popular politician.

Page views of Richard of York, 3rd Duke of Yorks by language

Among politicians, Richard of York, 3rd Duke of York ranks 2,053 out of 14,801. Before him are Sigismund of Burgundy, Jacob Zuma, Archduke Maximilian Francis of Austria, Nelson Rockefeller, Anne Neville, and Wen Jiabao. After him are Porus, Géza I of Hungary, Hans Luther, Bounnhang Vorachith, Ivan I of Moscow, and Amr ibn Hishām.