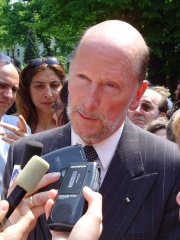 Simeon Borisov von Saxe-Coburg-Gotha (Bulgarian: Симеон Борисов Сакскобургготски, romanized: Simeon Borisov Sakskoburggotski, [simeˈɔn boˈrisof sakskoburˈgɔtski]; born 16 June 1937) is a Bulgarian politician who reigned as the last tsar of the Kingdom of Bulgaria as Simeon II from 1943 until 1946. He was six years old when his father Boris III of Bulgaria died in 1943 and royal power was exercised on his behalf by a regency led by Simeon's uncle Kiril, Prince of Preslav, General Nikola Mihov and prime minister, Bogdan Filov. In 1946 the monarchy was abolished by referendum, and Simeon was forced into exile. Read more on Wikipedia

Among politicians, Simeon Saxe-Coburg-Gotha ranks 1,757 out of 15,577. Before him are Shepseskaf, John II of Aragon, Akhmad Kadyrov, Nicolás Maduro, Olof Skötkonung, and Charles, Duke of Vendôme. After him are Conrad of Montferrat, Gheorghe Gheorghiu-Dej, Ferdinand Karl, Archduke of Austria-Este, Uesugi Kenshin, Ladislaus IV of Hungary, and Ali Abdullah Saleh.