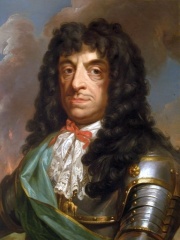 John II Casimir (Polish: Jan II Kazimierz Waza; Lithuanian: Jonas Kazimieras Vaza; 22 March 1609 – 16 December 1672) was King of Poland and Grand Duke of Lithuania from 1648 until his abdication in 1668 as well as titular King of Sweden from 1648 until 1660. He was the first son of Sigismund III Vasa with his second wife Constance of Austria. John Casimir succeeded his older half-brother, Władysław IV Vasa.As a prince, John Casimir embarked at Genoa for Spain in 1638 to negotiate a league with Philip IV against France, but was captured by Cardinal Richelieu and imprisoned at Vincennes where he remained for two years. Read more on Wikipedia

John II Casimir Vasa is most famous for being the king of Poland and Grand Duke of Lithuania from 1648 to 1668.

Among politicians, John II Casimir Vasa ranks 1,256 out of 15,577. Before him are Necho II, Ludwig I of Bavaria, Muawiya II, Sariputta, Hongxi Emperor, and Amr ibn Hishām. After him are Yaśodharā, Henry Clay, Philoctetes, Seonjo of Joseon, Carloman II, and Fuxi.