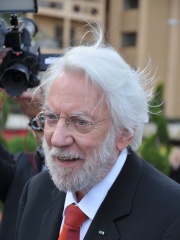 Donald McNichol Sutherland (born 17 July 1935) is a Canadian actor whose film career spans over six decades. He has been nominated for nine Golden Globe Awards, winning two for his performances in the television films Citizen X (1995) and Path to War (2002); the former also earned him a Primetime Emmy Award. An inductee of the Hollywood Walk of Fame and Canadian Walk of Fame, he also received a Canadian Academy Award for the drama film Threshold (1981). Read more on Wikipedia

Donald Sutherland is most famous for his starring role in the 1970s television series, "McCloud." He is also known for his roles in "Ordinary People," "The Dirty Dozen," "MASH," and "The Hunger Games."