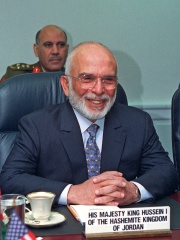 Hussein bin Talal (Arabic: الحسين بن طلال, Al-Ḥusayn ibn Ṭalāl; 14 November 1935 – 7 February 1999) was King of Jordan from 11 August 1952 until his death in 1999. As a member of the Hashemite dynasty, the royal family of Jordan since 1921, Hussein was a 40th-generation direct descendant of Muhammad.Hussein was born in Amman as the eldest child of Talal bin Abdullah and Zein al-Sharaf bint Jamil. Talal was then the heir to his own father, King Abdullah I. Hussein began his schooling in Amman, continuing his education abroad. Read more on Wikipedia

Hussein of Jordan is most famous for being the king of Jordan from 1952 to 1999. He was also the leader of the Arab League.

Page views of Hussein of Jordans by language

Among politicians, Hussein of Jordan ranks 728 out of 15,577. Before him are Alexander Lukashenko, Shunzhi Emperor, Zacchaeus, Vladislaus II of Hungary, Ferdinand I of the Two Sicilies, and Frederick William II of Prussia. After him are Stanisław Leszczyński, Cosimo I de' Medici, Grand Duke of Tuscany, Árpád, John III of Sweden, Charles IX of Sweden, and Antiochus IV Epiphanes.