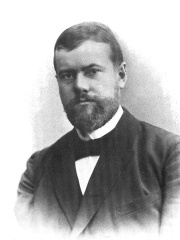 Maximilian Karl Emil Weber (; German: [ˈveːbɐ]; 21 April 1864 – 14 June 1920) was a German sociologist, philosopher, jurist, and political economist, who is regarded today as one of the most important theorists on the development of modern Western society. As his ideas would profoundly influence social theory and social research, Weber is often cited as among the three founders of sociology, alongside Émile Durkheim, and Karl Marx.Unlike Durkheim, Weber did not believe in monocausal explanations, proposing instead that for any outcome there can be multiple causes. As such, he would be a key proponent of methodological anti-positivism, arguing for the study of social action through interpretive (rather than purely empiricist) methods, based on understanding the purpose and meanings that individuals attach to their own actions. Read more on Wikipedia

Since 2007, the English Wikipedia page of Max Weber has received more than 3,791,545 page views. His biography is available in 115 different languages on Wikipedia making him the most popular sociologist.

Among SOCIOLOGISTS In Germany