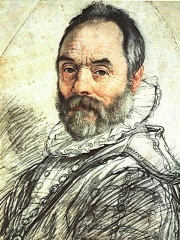 Giambologna (1529 – 13 August 1608) — (known also as Jean de Boulogne and Giovanni da Bologna) — was a Flemish sculptor based in Italy, celebrated for his marble and bronze statuary in a late Renaissance or Mannerist style. Read more on Wikipedia

Giambologna is most famous for his bronze statue of Neptune, which is located in the Piazza della Signoria in Florence.

Page views of Giambolognas by language

Among people born in 1529, Giambologna ranks 1. After him are Ferdinand II, Archduke of Austria, Franciscus Patricius, John Frederick II, Duke of Saxony, Taddeo Zuccari, Anthony Jenkinson, and Raphael Holinshed. Among people deceased in 1608, Giambologna ranks 2. Before him is John Dee. After him are Seonjo of Joseon, Maria Anna of Bavaria, Charles III, Duke of Lorraine, Joachim Frederick, Elector of Brandenburg, Sigismund Rákóczi, Frederick I, Duke of Württemberg, Andrew Avellino, Bernardo Buontalenti, Ğazı II Giray, and Marie Eleonore of Cleves.

Among SCULPTORS In France