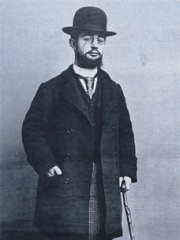 Comte Henri Marie Raymond de Toulouse-Lautrec-Monfa (24 November 1864 – 9 September 1901) was a French painter, printmaker, draughtsman, caricaturist and illustrator whose immersion in the colourful and theatrical life of Paris in the late 19th century allowed him to produce a collection of enticing, elegant, and provocative images of the sometimes decadent affairs of those times. Born into the aristocracy, Toulouse-Lautrec broke both his legs around the time of his adolescence and, due to the rare condition Pycnodysostosis, was very short as an adult due to his undersized legs. In addition to his alcoholism, he developed an affinity for brothels and prostitutes that directed the subject matter for many of his works recording many details of the late-19th-century bohemian lifestyle in Paris. Read more on Wikipedia

Henri de Toulouse-Lautrec is most famous for his paintings and drawings of Parisian nightlife in the late 1800s.