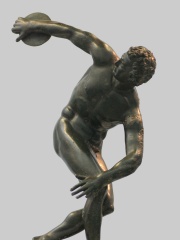 Myron of Eleutherae (Ancient Greek: Μύρων, Myrōn [mý.rɔːn]), working c. 480–440 BC, was an Athenian sculptor from the mid-5th century BC. He was born in Eleutherae on the borders of Boeotia and Attica. Read more on Wikipedia

Since 2007, the English Wikipedia page of Myron has received more than 246,700 page views. His biography is available in 49 different languages on Wikipedia. Myron is the 3rd most popular sculptor, the 39th most popular biography from Greece (down from 33rd in 2019) and the 2nd most popular Greek Sculptor.

Myron is most famous for his sculpture of a discus thrower.

Page views of Myrons by language

Among sculptors, Myron ranks 3 out of 189. Before him are Auguste Rodin and Phidias. After him are Praxiteles, Polykleitos, Benvenuto Cellini, Alberto Giacometti, Camille Claudel, Lysippos, Lorenzo Ghiberti, Antonio Canova, and Constantin Brâncuși.

Among people born in 500 BC, Myron ranks 2. Before him is Anaxagoras. After him are Leucippus, Xanthippe, Artaxerxes I of Persia, Ezra, Artemisia I of Caria, Brennus, Cyrus the Younger, Ictinus, Cratylus, and Xerxes II of Persia. Among people deceased in 500 BC, Myron ranks 2. Before him is Esther. After him are Leucippus, Ānanda, Polykleitos, Artemisia I of Caria, Hippasus, Rāhula, Diogenes of Apollonia, Gorgo, Queen of Sparta, Gaius Marcius Coriolanus, and Obadiah.