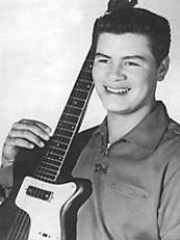 Richard Steven Valenzuela (May 13, 1941 – February 3, 1959), known professionally as Ritchie Valens, was an American singer, songwriter, and guitarist. A rock and roll pioneer and a forefather of the Chicano rock movement, Valens was killed in a plane crash eight months into his recording career.Valens had several hits, most notably "La Bamba", which he had adapted from a Mexican folk song. Valens transformed the song into one with a rock rhythm and beat, and it became a hit in 1958, making Valens a pioneer of the Spanish-speaking rock and roll movement. Read more on Wikipedia

Since 2007, the English Wikipedia page of Ritchie Valens has received more than 7,040,009 page views. His biography is available in 41 different languages on Wikipedia making him the 97th most popular musician.

Among musicians, Ritchie Valens ranks 97 out of 2,258. Before him are Angus Young, Bill Haley, Henryk Wieniawski, Robert Fripp, Alice Cooper, and John Dowland. After him are Buddy Holly, Gary Moore, Richard Clayderman, Till Lindemann, Gheorghe Zamfir, and George Martin.