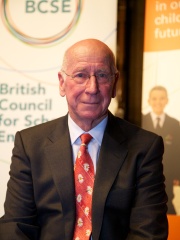 Sir Robert Charlton (born 11 October 1937) is an English former footballer who played either as a midfielder or a forward. Considered one of the greatest players of all time, he was a member of the England team that won the 1966 FIFA World Cup, the year he also won the Ballon d'Or. He played almost all of his club football at Manchester United, where he became renowned for his attacking instincts, his passing abilities from midfield and his ferocious long-range shot, as well as his fitness and stamina. Read more on Wikipedia

Bobby Charlton is most famous for being a member of the Manchester United team that won the European Cup in 1968. He also played for England and captained the team.