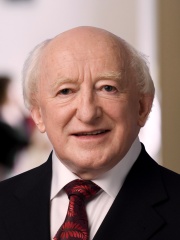 Since 2007, the English Wikipedia page of Michael D. Higgins has received more than 1,936,084 page views. His biography is available in 64 different languages on Wikipedia making him the 2,795th most popular politician.

Among politicians, Michael D. Higgins ranks 2,777 out of 14,801. Before him are Eadred, Charles William Ferdinand, Duke of Brunswick, Alfred, Duke of Saxe-Coburg and Gotha, Beatrice of Naples, Emperor Nintoku, and Emperor Ōgimachi. After him are Zulfikar Ali Bhutto, Mircea I of Wallachia, Fernando Henrique Cardoso, Sancho II of Castile and León, Eric V of Denmark, and Pharnaces II of Pontus.