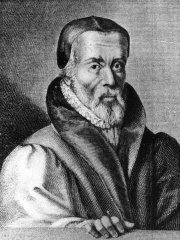 William Tyndale (; sometimes spelled Tynsdale, Tindall, Tindill, Tyndall; c. 1494 – c. 6 October 1536) was an English scholar who became a leading figure in the Protestant Reformation in the years leading up to his execution. He is well known as a translator of the Bible into English, influenced by the works of Erasmus of Rotterdam and Martin Luther.A number of partial English translations had been made from the 7th century onwards, but the religious ferment caused by Wycliffe's Bible in the late 14th century led to the death penalty for anyone found in unlicensed possession of Scripture in English, though translations were available in all other major European languages.Tyndale worked during a Renaissance of scholarship, which saw the publication of Reuchlin's Hebrew grammar in 1506. Greek was available to the European scholarly community for the first time in centuries, as it welcomed Greek-speaking intellectuals and texts following the fall of Constantinople in 1453. Read more on Wikipedia

William Tyndale was a scholar and translator of the Bible. He was the first person to translate the Bible into English, which is now known as the Tyndale Bible.

Among religious figures, William Tyndale ranks 699 out of 2,272. Before him are Al-Nasa'i, Adnan, Apollinaris of Ravenna, Sun Myung Moon, Brother Roger, and Abdullah ibn Saba'. After him are Gertrude the Great, Nikephoros I of Constantinople, Patriarch Kirill of Moscow, Martin Bucer, Mary of Bethany, and Nathan Söderblom.