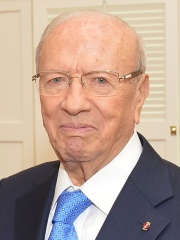 Mohamed Beji Caid Essebsi (or es-Sebsi; Arabic: محمد الباجي قائد السبسي, romanized: Muhammad al-Bājī Qā’id as-Sibsī, pronunciation ; 29 November 1926 – 25 July 2019) was a Tunisian statesman who served as the 4th president of Tunisia from 31 December 2014 until his death on 25 July 2019. Previously, he served as the minister of Foreign Affairs from 1981 to 1986 and as the prime minister from February 2011 to December 2011.Essebsi's political career spanned six decades, culminating in his leadership of Tunisia in its transition to democracy. Essebsi was the founder of the Nidaa Tounes political party, which won a plurality in the 2014 parliamentary election. Read more on Wikipedia

Beji Caid Essebsi is most famous for being the president of Tunisia.

Among politicians, Beji Caid Essebsi ranks 2,457 out of 15,577. Before him are Louis Barthou, Quintillus, Robert Dudley, 1st Earl of Leicester, Ephialtes, Necmettin Erbakan, and Theodosius III. After him are Psusennes I, Mursili I, Alcinous, Emperor Kōan, Tarō Asō, and Bernardo O'Higgins.