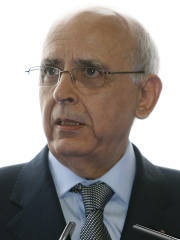 Mohamed Ghannouchi (Arabic: محمد الغنوشي‎ Muhammad Al-Ghannushi; born 18 August 1941) is a Tunisian politician who was Prime Minister of Tunisia from 1999 to 2011. Regarded as a technocrat, Ghannouchi was a long-standing figure in the Tunisian government under President Zine El Abidine Ben Ali. He also served as the Acting President of Tunisia from 14 January 2011 to 15 January 2011, holding the powers and duties of the office nominally for the absent President Zine El Abidine Ben Ali, who had fled the country due to the 2011 revolution. Read more on Wikipedia

Mohamed Ghannouchi is most famous for being the president of Tunisia.

Among politicians, Mohamed Ghannouchi ranks 3,628 out of 15,710. Before him are Paul Deschanel, Naoto Kan, Julia Avita Mamaea, Emperor Ping of Han, Daemusin of Goguryeo, and Albert VI, Archduke of Austria. After him are Margaret Chan, Henri de Baillet-Latour, Stentor, Oswald Pohl, Prince George, Duke of Kent, and Herschel Grynszpan.