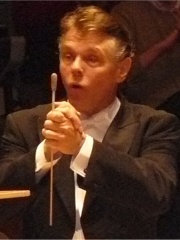 Mariss Ivars Georgs Jansons (14 January 1943 – 30 November/1 December 2019) was a Latvian conductor. During his lifetime, Jansons was often cited as one of the world's top living conductors. He was best known for his interpretations of Mahler, Strauss and Russian composers such as Tchaikovsky, Rachmaninoff and Shostakovich.Born in Riga, Latvia, Jansons moved to Leningrad (now Saint Petersburg) in 1956, where he studied conducting, and he received further training in Austria. Read more on Wikipedia

Since 2007, the English Wikipedia page of Mariss Jansons has received more than 305,180 page views. His biography is available in 28 different languages on Wikipedia making him the 201st most popular musician.

Among MUSICIANS In Latvia