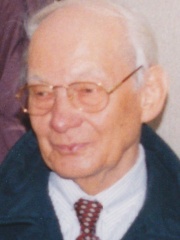 Manfred Eigen (German pronunciation: [ˈmanˌfʁeːt ˈaɪ̯ɡn̩] (listen); 9 May 1927 – 6 February 2019) was a German biophysical chemist who won the 1967 Nobel Prize in Chemistry for work on measuring fast chemical reactions.Eigen's research helped solve major problems in physical chemistry and aided in the understanding of chemical processes that occur in living organisms. In later years, he explored the biochemical roots of life and evolution. He worked to install a multidisciplinary program at the Max Planck Institute to study the underpinnings of life at the molecular level. Read more on Wikipedia

Manfred Eigen is most famous for his work on the theory of the chemical origin of life. He was awarded the Nobel Prize in Chemistry in 1967.

Among chemists, Manfred Eigen ranks 134 out of 510. Before him are Sune Bergström, Vincent du Vigneaud, John Macleod, Christian B. Anfinsen, Lars Onsager, and George Andrew Olah. After him are Fritz Strassmann, Stanley B. Prusiner, Kurt Wüthrich, Jean-Baptiste Dumas, Ascanio Sobrero, and Jean-Marie Lehn.