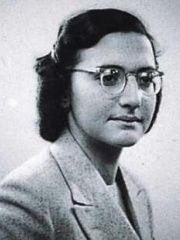 Margot Betti Frank (16 February 1926 – February or March 1945) was the elder daughter of Otto Frank and Edith Frank and the elder sister of Anne Frank. Margot's deportation order from the Gestapo hastened the Frank family into hiding. According to the diary of her younger sister, Anne, Margot kept a diary of her own, but no trace of Margot's diary has ever been found. Read more on Wikipedia

Margot was born in 1929 and lived with her family in Amsterdam. She was a German-born Jew who went into hiding with her family during the Nazi occupation of Holland. Her family was eventually discovered and sent to concentration camps. Margot died in 1945 in the Bergen-Belsen concentration camp. She is most famous for her diary, which she wrote from June 1942 until August 1944.

Among religious figures, Margot Frank ranks 673 out of 2,272. Before her are Eli, Saint Cajetan, Frances of Rome, Itzhak Stern, Saint Malachy, and Sa'id bin Zayd. After her are Yasuke, Zayd ibn Ali, Sabbas the Sanctified, Kinga of Poland, Therese Neumann, and Muhammad ibn al-Hanafiyyah.