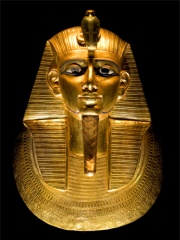 Psusennes I (Ancient Egyptian: pꜣ-sbꜣ-ḫꜥ-n-njwt; Greek Ψουσέννης) was the third pharaoh of the 21st Dynasty who ruled from Tanis between 1047 and 1001 BC. Psusennes is the Greek version of his original name Pasibkhanu or Pasebakhaenniut (in reconstructed Late Egyptian: /pəsiwʃeʕənneːʔə/), which means "The Star Appearing in the City" while his throne name, Akheperre Setepenamun, translates as "Great are the Manifestations of Ra, chosen of Amun." He was the son of Pinedjem I and Henuttawy, Ramesses XI's daughter by Tentamun. Read more on Wikipedia

Since 2007, the English Wikipedia page of Psusennes I has received more than 208,209 page views. His biography is available in 32 different languages on Wikipedia making him the 2,481st most popular politician.

Page views of Psusennes IS by language

Among politicians, Psusennes I ranks 2,464 out of 14,801. Before him are Louis Ferdinand, Prince of Prussia, Eleanor of Toledo, Wilhelmine Amalia of Brunswick-Lüneburg, Robert IV of Sablé, Samora Machel, and Elisabeth Ludovika of Bavaria. After him are Artur Axmann, Alexandru Ioan Cuza, Boris Johnson, Rafic Hariri, Choe Yong-gon, and Balthasar Charles, Prince of Asturias.