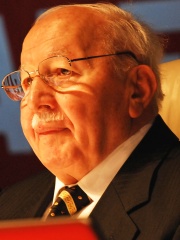 Necmettin Erbakan (29 October 1926 – 27 February 2011) was a Turkish politician, engineer, and academic who was the Prime Minister of Turkey from 1996 to 1997. He was pressured by the military to step down as prime minister and was later banned from politics by the Constitutional Court of Turkey for allegedly violating the separation of religion and state as mandated by the constitution.The political ideology and movement founded by Erbakan, Millî Görüş, argues that Turkey can develop with its own power by protecting its religious values and moving forward with faster steps by rivaling the Western countries in favor of closer relations to Muslim countries. Read more on Wikipedia

Necmettin Erbakan was a Turkish politician who served as the Prime Minister of Turkey from 1996 to 1997. He was later banned from politics for five years for violating the Constitution and was also banned from public service for life in 1998.

Among politicians, Necmettin Erbakan ranks 2,187 out of 15,710. Before him are Solomon, King of Hungary, Louis Ferdinand, Prince of Prussia, George Villiers, 1st Duke of Buckingham, Twosret, Anne de Montmorency, and Louis Philippe I, Duke of Orléans. After him are James II of Scotland, Yazid II, Aspar, Victor Lustig, Amanullah Khan, and Albert I, Prince of Monaco.