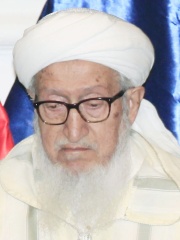 Sibghatullah Mojaddedi (Pashto: صبغت الله مجددي; Dari: صبغت‌الله مجددی; 27 September 1926 – 11 February 2019) was an Afghan politician, who served as Acting President after the fall of Mohammad Najibullah's government in April 1992. He was the first leader to call for armed resistance against the Soviet-backed regime in 1979 and founded the Afghan National Liberation Front at the time; later becoming a respected figure among the various Afghan mujahideen. He served as the chairman of the 2003 loya jirga that approved Afghanistan's new constitution. Read more on Wikipedia

Among politicians, Sibghatullah Mojaddedi ranks 2,732 out of 15,577. Before him are Philip II, Duke of Savoy, Nero Julius Caesar, Georges Couthon, Archduke Ernest of Austria, Eric IV of Denmark, and Ramon Berenguer IV, Count of Barcelona. After him are Mentuhotep I, Ahmad Shah Qajar, Spitamenes, Valentina Visconti, Duchess of Orléans, Telamon, and Princess Astrid, Mrs. Ferner.