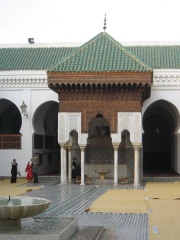 Fatima bint Muhammad Al-Fihriyya Al-Qurashiya (Arabic: فاطمة بنت محمد الفهرية القرشية‎) was an Arab woman who is credited with founding the al-Qarawiyyin mosque in 859 CE in Fez, Morocco. She is also known as "Umm al-Banayn". Al-Fihri died around 880 AD. The Al-Qarawiyyin mosque subsequently developed a teaching institution, which became the University of al-Qarawiyyin in 1963.Her story is told by Ibn Abi Zar' (d. Read more on Wikipedia

She is most famous for founding the University of Qarawiyyin in Fez, Morocco.

Among religious figures, Fatima al-Fihri ranks 710 out of 2,272. Before her are Mary of Bethany, Nathan Söderblom, Catherine of Vadstena, Antipope Boniface VII, Maudgalyayana, and Ibrahim ibn Muhammad. After her are Jethro, Mahapajapati Gotami, Gregory Thaumaturgus, Thomas Wolsey, Theophilus of Antioch, and Vilna Gaon.

Among people born in 800, Fatima al-Fihri ranks 10. Before her are Ælla of Northumbria, Pope Boniface VI, Pope Adrian III, Pope Sergius II, Horik I, and Offa of Mercia. After her are Thomas the Slav, Antipope Philip, Gudfred, Pribina, Piast the Wheelwright, and Al-Muqanna. Among people deceased in 880, Fatima al-Fihri ranks 2. Before her is Carloman of Bavaria. After her are Bruno, Duke of Saxony and Ariwara no Narihira.

Among RELIGIOUS FIGURES In Tunisia