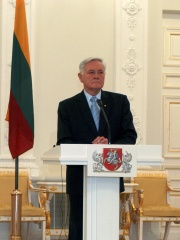 Valdas Adamkus ([ˈvɐ̂ˑɫdɐs ɐˈdɐmˑkʊs] (listen); born Voldemaras Adamkavičius; 3 November 1926) is a Lithuanian-American politician, diplomat and civil engineer. He served as the 5th and 7th President of Lithuania from 1998 to 2003 and again from 2004 to 2009. Adamkus' first tenure as president lasted for five years, from 26 February 1998 to 28 February 2003, following his defeat by Rolandas Paksas in the 2003 presidential election. Read more on Wikipedia

Valdas Adamkus was the president of Lithuania from 1998 to 2003. He was the first Lithuanian president to be born after the country regained its independence from the Soviet Union. He is most famous for his efforts to bring Lithuania into NATO and the European Union.

Among politicians, Valdas Adamkus ranks 2,700 out of 15,577. Before him are Childebert II, Hissène Habré, Hyeokgeose of Silla, Thabo Mbeki, Thomas of Lancaster, 1st Duke of Clarence, and Wilhelm Karl, Duke of Urach. After him are George Plantagenet, 1st Duke of Clarence, Arsinoe III of Egypt, Maharana Pratap, Juscelino Kubitschek, Alfonso IX of León, and Ottokar I of Bohemia.