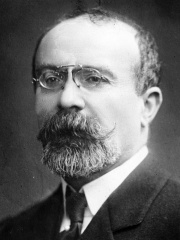 Jean Louis Barthou (French pronunciation: ​[ʒɑ̃ lwi baʁtu]; 25 August 1862 – 9 October 1934) was a French politician of the Third Republic who served as Prime Minister of France for eight months in 1913. Read more on Wikipedia

Barthou was a French politician who served as the Minister of Foreign Affairs from 1924 to 1932. He is most famous for negotiating the Treaty of Locarno with Germany in 1925, which guaranteed that France would not be attacked by Germany.

Among politicians, Louis Barthou ranks 2,451 out of 15,577. Before him are Vasily I of Moscow, Giovanna of Italy, Renée of France, Paul-Henri Spaak, Adad-nirari III, and Prince Aimone, Duke of Aosta. After him are Quintillus, Robert Dudley, 1st Earl of Leicester, Ephialtes, Necmettin Erbakan, Theodosius III, and Beji Caid Essebsi.