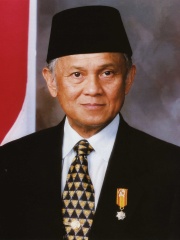 Bacharuddin Jusuf Habibie (Indonesian: [baxaˈrudːin ˈjusuf haˈbibi] (listen); 25 June 1936 – 11 September 2019) was an Indonesian engineer and politician who was the third president of Indonesia from 1998 to 1999. Less than three months after his inauguration as the seventh vice president in March 1998, he succeeded Suharto who resigned after 31 years in office. His presidency is seen as a landmark and transition to the Reformation era. Read more on Wikipedia

B. J. Habibie is most famous for being the president of Indonesia in 1998.

Page views of B. J. Habibies by language

Among politicians, B. J. Habibie ranks 2,636 out of 15,710. Before him are John Buchan, Álmos, Yasuo Fukuda, Archduke Ernest of Austria, Razia Sultana, and Canute I of Sweden. After him are Otto III, Duke of Bavaria, George V of Hanover, Frederick Christian, Elector of Saxony, Gaius Marcius Coriolanus, Midhat Pasha, and Megawati Sukarnoputri.