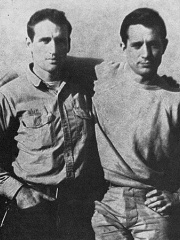 Neal Leon Cassady (February 8, 1926 – February 4, 1968) was a major figure of the Beat Generation of the 1950s and the psychedelic and counterculture movements of the 1960s. He was prominently featured as himself in the "scroll" (first draft) version of Jack Kerouac's novel On the Road, and served as the model for the character Dean Moriarty in the 1957 version of that book. In many of Kerouac's later books, Cassady is represented by the character Cody Pomeray. Read more on Wikipedia

Neal Cassady is most famous for being the inspiration for the character Dean Moriarty in Jack Kerouac's novel "On the Road."

Among writers, Neal Cassady ranks 720 out of 5,794. Before him are Odysseas Elytis, Andrea Camilleri, Max Jacob, Carlos Fuentes, Alejo Carpentier, and Georgiana Cavendish, Duchess of Devonshire. After him are Lesya Ukrainka, Sin Saimdang, Vittoria Colonna, Cornelia, mother of the Gracchi, Amin Maalouf, and Curzio Malaparte.