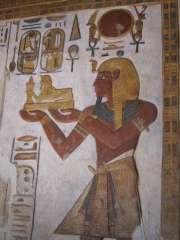 Usermaatre Meryamun Ramesses III (also written Ramses and Rameses) was the second Pharaoh of the Twentieth Dynasty in Ancient Egypt. He is thought to have reigned from 26 March 1186 to 15 April 1155 BC and is considered to be the last great monarch of the New Kingdom to wield any substantial authority over Egypt. His long reign saw the decline of Egyptian political and economic power, linked to a series of invasions and internal economic problems that also plagued pharaohs before him. Read more on Wikipedia

Ramesses III is most famous for his campaign against the Libyans and for his mortuary temple at Medinet Habu.

Among noblemen, Ramesses III ranks 36 out of 843. Before him are Diana, Princess of Wales, Margaret of Valois, Alexander Nevsky, Marie de' Medici, Rainier III, Prince of Monaco, and Queen Sofía of Spain. After him are Princess Beatrice of the United Kingdom, Henry IV of England, Otto von Habsburg, Ludovico Sforza, Naruhito, and Pope Leo IX.