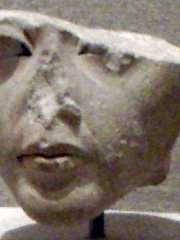 Ankhesen-amun (ˁnḫ-s-n-imn, "Her Life Is of Amun"; c. 1348 – after 1322 BC) was a queen who lived during the 18th Dynasty of Egypt as the daughter of a king and subsequently became the Great Royal Wife of another king. Born Ankhesen-paaten (ˁnḫ.s-n-pꜣ-itn, "she lives for the Aten"), she was the 3rd of 6 known daughters of the Egyptian Pharaoh Akhenaten and his Great Royal Wife Nefertiti. Read more on Wikipedia

Since 2007, the English Wikipedia page of Ankhesenamun has received more than 1,332,771 page views. Her biography is available in 43 different languages on Wikipedia making her the 21st most popular companion.

Page views of Ankhesenamuns by language

Among companions, Ankhesenamun ranks 20 out of 586. Before her are Mihrimah Sultan, Khadija bint Khuwaylid, Catherine of Aragon, Nurbanu Sultan, Roxana, and Lucretia. After her are Olympias, Joseph Bonaparte, Messalina, Aspasia, Mileva Marić, and Theodora.