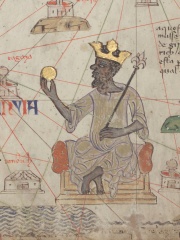 Musa I of Mali

Musa I (c. 1280 – c. 1337), or Mansa Musa, was the tenth Mansa (which translates to "sultan", "conqueror" or "emperor") of the Mali Empire, an Islamic West African state. He has been described as the wealthiest individual of the Middle Ages. At the time of Musa's ascension to the throne, Mali in large part consisted of the territory of the former Ghana Empire, which Mali had conquered. Read more on Wikipedia

Since 2007, the English Wikipedia page of Musa I of Mali has received more than 4,221,454 page views. His biography is available in 48 different languages on Wikipedia making him the 414th most popular politician.

Page views of Musa I of Malis by language

Among politicians, Musa I of Mali ranks 410 out of 14,801. Before him are Frederick III, Holy Roman Emperor, Charles IV of France, Neville Chamberlain, Theodosius II, Henry the Fowler, and Louis X of France. After him are Imre Nagy, Şehzade Bayezid, Yongle Emperor, Xanthippe, Charles III of Spain, and Frederick III, German Emperor.