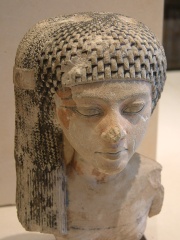 Meritaten, also spelled Merytaten or Meryetaten (Ancient Egyptian: mrii.t-itn) (14th century BC), was an ancient Egyptian royal woman of the Eighteenth Dynasty of Egypt. Her name means "She who is beloved of Aten"; Aten being the sun-deity whom her father, Pharaoh Akhenaten, worshipped. She held several titles, performing official roles for her father and becoming the Great Royal Wife to Pharaoh Smenkhkare, who may have been a brother or son of Akhenaten. Read more on Wikipedia

Page views of Meritatens by language

Among politicians, Meritaten ranks 1,251 out of 15,710. Before her are James Buchanan, Peter I of Portugal, Haakon IV of Norway, Majorian, Esarhaddon, and Henry the Lion. After her are Feodor II of Russia, Ur-Nammu, Neoptolemus, Giorgio Napolitano, Christine Lagarde, and Boris Johnson.