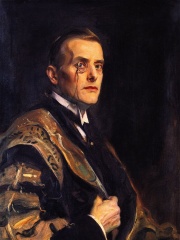 Sir Joseph Austen Chamberlain (16 October 1863 – 16 March 1937) was a British statesman, son of Joseph Chamberlain and older half-brother of Prime Minister Neville Chamberlain. He served as Chancellor of the Exchequer (twice) and was briefly Conservative Party leader before serving as Foreign Secretary. Brought up to be the political heir of his father, whom he physically resembled, he was elected to Parliament as a Liberal Unionist at a by-election in 1892, and held office in the Unionist coalition governments of 1895–1905, remaining in the Cabinet as Chancellor of the Exchequer (1903–05) after his father resigned in 1903 to campaign for Tariff Reform. Read more on Wikipedia

Austen Chamberlain is most famous for being the British Foreign Secretary during World War I. He was instrumental in negotiating the Treaty of Versailles.

Among politicians, Austen Chamberlain ranks 2,108 out of 15,577. Before him are Leopoldo Galtieri, John IV Laskaris, Berenice IV of Egypt, Dangun, Nikola IV Zrinski, and Kanishka. After him are Manasseh, Charles VIII of Sweden, Willi Stoph, Maria Ludovika of Austria-Este, Kavad I, and Al-Mahdi.