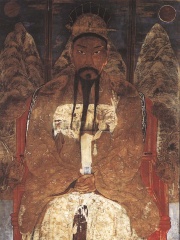 Dangun (단군; 檀君; [tan.ɡun]) or Dangun Wanggeom (단군왕검; 檀君王儉; [tan.ɡun waŋ.ɡʌm]) was the legendary founder and god-king of Gojoseon, the first Korean kingdom, around present-day Liaoning province in Northeast China and the northern part of the Korean Peninsula. He is said to be the "grandson of heaven" and "son of a bear", and to have founded the kingdom in 2333 BC. The earliest recorded version of the Dangun legend appears in the 13th-century Samguk Yusa, which cites China's Book of Wei and Korea's lost historical record Gogi (lit. 'Ancient Record') (고기, 古記). Read more on Wikipedia

Dangun is most famous for being the founder of Korea.

Page views of Danguns by language

Among politicians, Dangun ranks 1,766 out of 15,710. Before her are Ma Chao, Joannes, Marozia, Herman Van Rompuy, Louis II, Prince of Monaco, and Cemal Gürsel. After her are Emmanuel Philibert, Duke of Savoy, Pupienus, Faisal II of Iraq, Hippias, Ḫattušili III, and Michael IX Palaiologos.