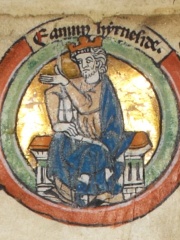 Edmund Ironside (c. 990 – 30 November 1016; Old English: Ēadmund, Latin: Edmundus; sometimes also known as Edmund II) was King of the English from 23 April to 30 November 1016. He was the son of King Æthelred the Unready and his first wife, Ælfgifu of York. Edmund's reign was marred by a war he had inherited from his father; his cognomen "Ironside" was given to him "because of his valour" in resisting the Danish invasion led by Cnut the Great.Edmund was not expected to be King of England; however, by June 1014 two elder brothers had died, making him heir apparent. Read more on Wikipedia

Among politicians, Edmund Ironside ranks 2,204 out of 15,710. Before him are Muhammad Ali Jinnah, James III of Scotland, Ajax the Lesser, Leopold V, Duke of Austria, Huayna Capac, and Blanche I of Navarre. After him are Grand Duke Dmitri Pavlovich of Russia, Lamoral, Count of Egmont, Prince Philippe, Count of Paris, Ladislaus of Naples, Philipp Scheidemann, and Childebert III.