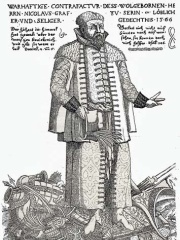 Nikola Šubić Zrinski (Croatian pronunciation: [nǐkɔla ʃûbitɕ zrîːɲskiː]), (15 July 1508 – 7 September 1566), also commonly known as Nikola IV Zrinski or Miklós IV Zrínyi (Hungarian: Zrínyi Miklós, Hungarian pronunciation: [ˈzriːɲi ˈmikloːʃ]) was a Croatian nobleman and general, Ban of Croatia from 1542 until 1556, royal master of the treasury from 1557 until 1566, and a descendant of the Croatian noble families Zrinski and Kurjaković. During his lifetime the Zrinski family became the most powerful noble family in the Kingdom of Croatia. Zrinski became well known across Europe for his involvement in the siege of Szigetvár (1566), where he heroically died stopping Ottoman Empire's Sultan Suleiman the Magnificent's advance towards Vienna. Read more on Wikipedia

Nikola IV Zrinski was a Croatian count and a military commander who led the Croatian-Hungarian rebellion against the Habsburgs.