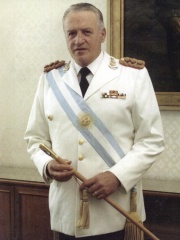 Leopoldo Fortunato Galtieri Castelli (Spanish pronunciation: [leoˈpoldo foɾtuˈnato ɣalˈtjeɾi kasˈteli]; 15 July 1926 – 12 January 2003) was an Argentine general and politician who served as President of Argentina from December 1981 to June 1982. Galtieri ruled as a military dictator during the National Reorganization Process as leader of the Third Junta with Jorge Anaya and Basilio Lami Dozo.Galtieri was chief combat engineer of the Argentine Army and a supporter of the 1976 military coup d'état which helped him become commander-in-chief of the army in 1980. Galtieri overthrew Roberto Viola and was appointed President, establishing Argentina as a strong ally of the United States, introducing fiscally conservative economic reforms, and increasing support to Contras in Nicaragua. Read more on Wikipedia

Leopoldo Galtieri was a military dictator of Argentina in the 1980s. He is most famous for leading the 1982 invasion of the Falkland Islands (known as Las Malvinas in Argentina) and the 1983 invasion of the British-held islands of South Georgia and the South Sandwich Islands.

Among politicians, Leopoldo Galtieri ranks 2,102 out of 15,577. Before him are Mieszko I of Poland, Musa ibn Nusayr, Edmund Ironside, Marcus Claudius Tacitus, Al-Hakam II, and Dagobert III. After him are John IV Laskaris, Berenice IV of Egypt, Dangun, Nikola IV Zrinski, Kanishka, and Austen Chamberlain.