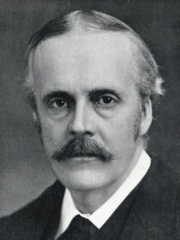 Arthur James Balfour, 1st Earl of Balfour, (, traditionally Scottish ; 25 July 1848 – 19 March 1930), also known as Lord Balfour, was a British Conservative statesman who served as Prime Minister of the United Kingdom from 1902 to 1905. As foreign secretary in the Lloyd George ministry, he issued the Balfour Declaration in 1917 on behalf of the cabinet. Entering Parliament in 1874, Balfour achieved prominence as Chief Secretary for Ireland, in which position he suppressed agrarian unrest whilst taking measures against absentee landlords. Read more on Wikipedia

Arthur Balfour was a British Prime Minister from 1902-1905. He is most famous for his Balfour Declaration, which was a letter he wrote to Lord Rothschild in 1917 that stated the British government's support for a Jewish homeland in Palestine.

Among politicians, Arthur Balfour ranks 2,013 out of 15,710. Before him are Jeroboam II, Danjong of Joseon, Boniface I, Marquess of Montferrat, Haggai, Benito Juárez, and Theuderic III. After him are Rupert, King of Germany, Viriathus, Nicias, Julius Martov, Ibrahim Rugova, and Michael IV the Paphlagonian.