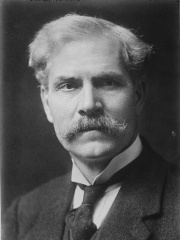 James Ramsay MacDonald (né James McDonald Ramsay; 12 October 1866 – 9 November 1937) was a British politician who was the first Labour Party member to become Prime Minister of the United Kingdom, leading minority Labour governments for nine months in 1924 and then from 1929–1931. From 1931 to 1935, he headed a National Government dominated by the Conservative Party and supported by only a few Labour members. Read more on Wikipedia

Ramsay MacDonald is most famous for being the first Labour Prime Minister. He was elected to office in 1924 and was in office until 1929.

Among politicians, Ramsay MacDonald ranks 2,843 out of 15,710. Before him are Francisco I. Madero, Maria Komnene, Queen of Jerusalem, Armand Fallières, Heinrich Lübke, Hyeokgeose of Silla, and Lucius Aemilius Paullus. After him are Charles William Ferdinand, Duke of Brunswick, Alexander I of Epirus, Theudebert I, Helenus, Princess María de las Mercedes of Bourbon-Two Sicilies, and Necho I.